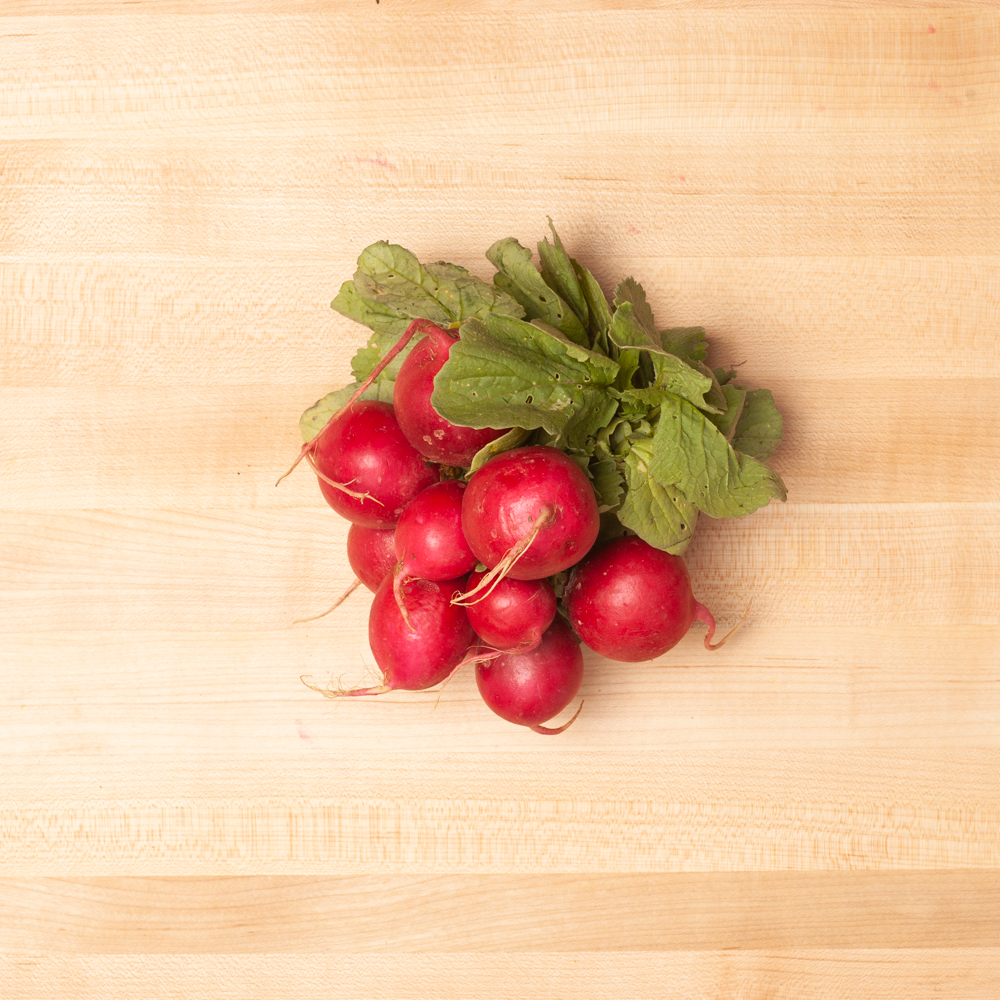 Before I started working at Lancaster Local Provisions I thought red radishes were only good as a salad topping, an ingredient for crudites or to carve into great decorations.  Chef Diana completely changed my opinion of these wonderful tubers of the Brassicaceae family and taught me that we don’t only eat the root but the leaves as well…oh, and that they’re not only good raw but cooked, too!  So let Johnny Kat introduce you properly to this week’s Star Ingredient, the Red Radish!

Get To Know Red Radishes!

Red radishes are a fast-growing crop.  They can be ready to harvest about 3 to 4 weeks after planted.  They’re sometimes referred to as Spring or Summer radishes and even as European radishes.  They can be useful as companion plants for many other crops, probably because their pungent odor deters insect pests or even lures them away from the main crops.  They originated in Southeast Asia but spread to Europe thanks to Greek and Roman agriculturists.  They also seem to have been one of the first European crops introduced to the Americas!

But It’s All About The Taste, Right?

When eaten raw, red radishes are spicy, crisp and zesty.  That said, they can range in flavor from mild to slightly peppery owing in part to weather, growing conditions and other variables.  Cooking brings out the sweetness and will tap down the spiciness.  And don’t forget about the leaves!  They have a flavor similar to mild spinach.  You can eat them raw mixed in with other greens or cooked or made into a pesto (another tip I learned from Chef Diana).

Newsflash…Red Radishes Are Extremely Healthy For You!

Not only are red radishes a good source of antioxidants like catechin, pyrogallol and vanillic acid, they also have a good amount of Vitamin C and potassium.  They’re also excellent allies of the liver and stomach since they remove bilirubin and kill toxins that can accumulate in these organs.  But wait…there’s more!

Radishes are beneficial in the treatment of urinary disorders because by nature they’re highly diuretic which means they’ll help increase significantly urine production.  Their juice also heals inflammations in the digestive system and urinary tracts and can inhibit infections of the kidneys.  Seriously…the list of benefits goes on and on!!

Cut off the radishes’ leafy green tops just above where the stems meet the root.  Keep the roots unwashed in the fridge in a plastic zip-top baggie with a slightly damp folded paper towel at the bottom until you’re ready to use them.  They’ll last a couple of weeks stored in this manner.

The radish greens on the other hand won’t keep for long.  Wash, dry thoroughly, refrigerate and use within 2 to 3 days.  Sometimes you can revive wilted radish greens in ice water but no problem if that doesn’t work.  Wilted radish greens can still be turned into a pesto or even added to a smoothie!  Kale just got new competition!

So Many Ways To Red Radish!

OK…time to move beyond just using red radishes for crudite and salads!  Try roasting them or pickling them.  Give some crunch to a soup next time by adding chopped red radishes at the end.  Slice them into mini matchsticks and use them in a slaw.  You can even braise them to use in a grain bowl!  We’ve already gone over what you can do with the greens!  Chef Diana has a Radish Green Pesto Pasta recipe for this week so definitely check that out!  Plus, there are several recipes she’s done in the past using radishes including a quick pickling, a hash and even a frittata!  Use the word “radish” and do a search on the site to find them all!

What Grows Together, Goes Together!

Chef Diana grew up in Lancaster County, PA and has a rich agricultural family history in the area.

She is co-founder of Lancaster Local Provisions, a minimal waste, startup company on a grassroots mission to create a sustainable, local food system in Lancaster County, PA

“It’s important to know where our food is coming from, and how it’s made. I want to get families eating locally and seasonally. Let’s get cooking!”